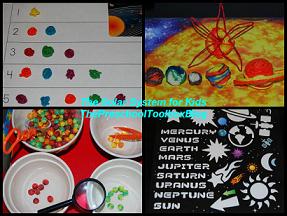 Many parents and teachers avoid presenting The Solar System to younger children as they feel the material is too complicated.  Young children are amazed by the stars and the planets; they see the sun, the moon, and can view some planets in the night sky.  By offering age appropriate learning and play activities, parents and teachers can plant tiny seeds of knowledge that will blossom as the children grow!

The Solar System is primarily comprised of the Sun and the 8 planets (Pluto, since 2006, is no longer classified as a planet).  The 8 planets are:  Mercury, Venus, Earth, Mars, Jupiter, Saturn, Uranus, and Neptune.

Sun – the Sun is a star and is the largest body in our Solar System.  The Sun provides energy for all the living things on the Earth.

Venus – Venus is the second planet closest to the Sun.  Venus is a bright planet and can be seen in the night sky.

Earth – the Earth is the only planet in our Solar System that supports life:  plants, animals, and people.

Mars – Mars is the fourth closest planet to the Sun.  It is a rocky planet covered in red dust.  Mars is often called the “red planet.”

Jupiter – Jupiter is the fifth closest planet to the Sun.  It is a big planet and can be seen in the night sky.

Saturn – Saturn is the sixth closest planet the Sun.  Saturn has colored rings that surround it.

Uranus – Uranus is the seventh closest planet to the Sun.   Uranus is very far away and has 11 thin rings surrounding it.

Neptune – Neptune is the eighth, and farthest, planet from the Sun.  Neptune is a windy planet.  Winds on Neptune’s surface can exceed the combined winds of 4 of Earth’s strongest tornadoes!

Of all the moons in our Solar System, the Earth’s moon is the only one that children can see in the night sky.

If you have an observatory or planetarium close to you, plan to take the children!  We had the opportunity to visit Yerkes Observatory last year.  It was an awesome day of discovery!

Materials needed:  Trix® or other round colored cereal (the swirled Trix® really look like miniature planets), 4 bowls, spoons or tweezers (to transfer), and a tray.

In order to help our children better understand the planets, we asked each of them to create the Sun and the 8 planets out of Wikki Stix.  The activity was a huge success!  Some of the children chose to work with a partner and others preferred to create alone.  It was truly amazing to watch the children turn their ideas into a hands-on Solar System!

Explain to the children that GRAVITY keeps the planets moving around (orbiting) the Sun.  Gravity also keeps people on the Earth instead of floating out into space.  For a simple experiment with gravity, have the children toss a ball into the air.  What happens?  The ball comes DOWN.  Without the Earth’s gravity, the ball would float off into the sky.

We did our experiment with parachute men.  They are inexpensive and our kids like to toss them around.  Ask your children to predict what will happen to the parachute men after they are tossed in the air (the Earth’s gravity will cause the parachute men to fall back to the ground)!

Books to Read to Young Children

My Picture Book of the Planets by Nancy E. Krulik

Print the numbered play dough mats and laminate for durability.  Have the children use Wikki Stix or Playdough to make small balls to resemble planets.  The students should then place the required number of “planets” on the mat next to the numeral.

Extension for older students:  Have students try to read the number words on each line (pages 5-6 of the pdf) and place that many planet balls in each row.

Extension for older students #2: Use the addition or subtraction equations (pages 7-8 of the pdf) to figure out how many planets are needed in each row.

Extension for younger children: Use pdf pages 2 and 4 which have orange dots for children to use to place one planet ball upon each dot. This helps students keep track as they count and add on more planets to their row.

Join our newsletter & receive the FREE DOWNLOAD:
Explorations with ALL 5 SENSES!

Enjoy in the classroom or at home!

Previous Post: « Patriotic Activities for Kids to Celebrate the 4th of July!
Next Post: What’s Inside a Baseball? – Summer Science Activity for Preschool! »

SEARCH for an ACTIVITY or SEASONAL THEME HERE!

This website uses cookies to improve your experience while you navigate through the website. Out of these, the cookies that are categorized as necessary are stored on your browser as they are essential for the working of basic functionalities of the website. We also use third-party cookies that help us analyze and understand how you use this website. These cookies will be stored in your browser only with your consent. You also have the option to opt-out of these cookies. But opting out of some of these cookies may affect your browsing experience.
Necessary Always Enabled
Necessary cookies are absolutely essential for the website to function properly. This category only includes cookies that ensures basic functionalities and security features of the website. These cookies do not store any personal information.
Non-necessary
Any cookies that may not be particularly necessary for the website to function and is used specifically to collect user personal data via analytics, ads, other embedded contents are termed as non-necessary cookies. It is mandatory to procure user consent prior to running these cookies on your website.
SAVE & ACCEPT