This post is the fourth in a series on encouraging intuitive math skills in preschool children.  If you would like to see the first post (Number Awareness and Recognition, 1-to-1 Correspondence, and Subitizing), you can view it here.  Activities for 5 and 10 Frames can be printed here, and suggestions for introducing Part Part Whole can be seen here.

There are 6 important number concepts that preschoolers need to have opportunities to explore through play in order to develop good math intuition skills.  This numbers post (Part Four} will concentrate on playing and learning with the concepts of:  More Than, Less Than, and Equal To.

Number Awareness and Recognition
One-to-One Correspondence
Subitizing
Anchors of 5 and 10
Part+Part=Whole
More Than, Less Than, or Equal To

As Early Childhood Educators, we receive children from different backgrounds and with different skill sets.  This math series seeks to build upon skills by introducing important concepts that young children should be offered opportunities to play with and explore.  Please take a moment to browse the other posts offered in the Intuitive Math series (linked above) for ways to introduce number concepts to preschoolers.

GREATER THAN, LESS THAN, or EQUAL TO

As young children gain confidence in subitizing (the ability to intuitively know HOW MANY objects are in a small group) and become familiar with basic numbers and counting, we can begin to introduce the concepts of:  Greater Than, Less Than, and Equal To.   We use a cross-curriculum concept for introducing our kids to each of the symbols.  For early literacy, our kids still LOVE the Letter People.  We have the all of the original letter people in our classroom; “Mr. Munching Mouth” is a name that is very familiar to our kids.

Invite your kids to make the hand signs (as pictured above) to help them visualize the symbols for Greater Than, Less Than, or Equal To.  Explain to the children that Mr. Munching Mouth always wants to MUNCH on the bigger numbers; his mouth always opens toward the number that is larger.  When the numbers are the SAME, Mr. Munching Mouth closes his mouth to form the EQUAL sign.  Invite the children to practice with their hands to make a “munching mouth” that is Greater Than, Less Than, or Equal To.

Materials needed:  One Mr. Munching Mouth file (linked above), any counters or manipulatives (suggestions:  Unifix cubes, pompoms, blocks, large “wiggly craft eyes”, shells, stones, marshmallows, or bingo chips), and one copy of Mr. Munching Mouth Numbers (linked above).  NOTE:  please be aware of young children who still put objects in their mouth.  Small manipulatives are a choking hazard and larger items for counting should be used.

Prior to the activity:  Print the Munching Mouths and Numbers Cards from the files above, laminate for durability, and cut out.  Note:  the second page of the numbers file is left intentionally blank for use with any numbers, number words, tally marks, or dots to vary the math activity.

On a tray or a table, make two piles of number cards, any manipulatives desired, and all 3 of the munching mouth cards.

The children should pick two number cards and decide which munching mouth symbol represents the relationship between the two numbers:  Greater Than, Less Than, or Equal To.

The following games are also fun for preschoolers to explore the concepts of Greater Than, Less Than, or Equal to:

2).  Two color sorting – set out two colors of manipulatives (counters) in one container.  Invite the children to sort the two colors into separate containers.  After counting each color, see if the children can determine which color has MORE than the other.  For younger children, do this activity as a group and count the number of items together.  Use only a small number of each color until the children gain confidence in sorting and counting.  Again, ask the children to use the “munching mouth” hand signs as you determine which color has more than, less than, or is the same.

3).  Stacking Cups – invite the children to play with paper or plastic cups.  Have the children stack two separate cup towers.  As a group (or individually) count the number of cups in each of the stacks.  Which of the cup towers has more than (or less than) the other? 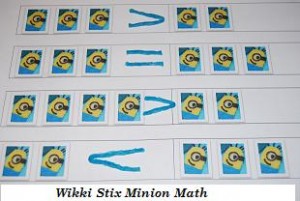 4).  If your kids like MINIONS, we have a printable GREATER THAN or LESS THAN Math Game that uses Wikki Stix.  It’s another fun way to encourage kids to play with Math!

To be sure you do not miss any future posts in the Intuitive Math Series for Preschool, please take a moment and subscribe to our blog!

Join our newsletter & receive the FREE DOWNLOAD:
Explorations with ALL 5 SENSES!
Enjoy in the classroom or at home!

SEARCH for an ACTIVITY or SEASONAL THEME HERE!

This website uses cookies to improve your experience while you navigate through the website. Out of these, the cookies that are categorized as necessary are stored on your browser as they are essential for the working of basic functionalities of the website. We also use third-party cookies that help us analyze and understand how you use this website. These cookies will be stored in your browser only with your consent. You also have the option to opt-out of these cookies. But opting out of some of these cookies may affect your browsing experience.
Necessary Always Enabled
Necessary cookies are absolutely essential for the website to function properly. This category only includes cookies that ensures basic functionalities and security features of the website. These cookies do not store any personal information.
Non-necessary
Any cookies that may not be particularly necessary for the website to function and is used specifically to collect user personal data via analytics, ads, other embedded contents are termed as non-necessary cookies. It is mandatory to procure user consent prior to running these cookies on your website.
SAVE & ACCEPT